A combination of a lack of spare time and the weather has meant that I haven’t been out and about much over the last few days. I haven’t even walked the dog for a few days. Only bird news of interest is that there is a Red Kite (or more than one) that is regularly drifting low, as in fifty feet or less, over the gardens in Chiseldon. It may be that someone is putting food out for it. I may try so myself if I can devise a way of doing it without attracting rats and corvids. Also there is a regular small flock of Swifts screaming overhead most evenings.

Not What You Would Expect…..

…..to see in the middle of a busy shopping street in North London. Today I had the dubious pleasure of a trip to the London Borough of Haringey. On my way back home I was driving along Green Lane which is a busy ‘A’ road through the middle of Wood Green Shopping Centre when I spotted a Demoiselle sp. flying along the middle of the road. Not quite the usual place you would expect to see one.

An Evening Walk on Russley Down

For the first time in ages I took the dog for an evening walk on Russley Down. It was a lovely evening with a pleasant cooling breeze. Getting out of the car I was greeted by the sounds of  Whitethroat and Yellowhammer. Several more of both of these species were heard but only Yellowhammer was seen. Three singing Skylarks and two Corn Buntings were next, followed by Red-legged Partridge and a Hare. A couple of Ringlets were a surprise at well gone nine o’clock. Several Lesser Black-backed Gulls were passing overhead headed in the direction of the Water Park. Back at the car a lone Blackbird was singing and a Magpie and Crow flew past.

The Emperor and I.

Just for a change, today went as planned with a visit to Savernake to look for Purple Emperor. This would be the third year that I had been to the Column, a well-known spot for them. On the drive in I had good views of Marsh and Coal Tits and Nuthatch was heard. First decision was whether to just stay in one place or to have a wander around. I decided on a combination and started with a stroll down to the nearby pond. Seen here were Common Blue and Large Red Damselfly, a few White and Ringlet butterflies and some what I think are Grove Snails. Around the Column and along Column Ride there were loads of butterflies with Ringlet, Speckled Wood, Large, Small and Green-veined White, Small Tortoishell, Marbled White, White Admiral and Silver-washed Fritillary all seen in varying numbers. Apart from the Speckled Woods all of the Butterflies seemed restless, hardly stopping for a second, giving little chance of getting photos. The single White Admiral I saw alighted briefly on the sunny face of the column but was gone before I could get close. The Fritillaries were only seen as they flew along the Ride, barely hesitating in the passage. With no sign of Purple Emperor I wandered back down for another look at the pond. Nothing new here so it was back to the Column. As I walked in off the track I saw a large butterfly on the shady side of the Column. From its size it was obviously an Emperor. I managed one quick photo before it flew off. I then settled down to see if it would return, I hadn’t thought to watch the shaded side, assuming any butterfly would want to remain in the sun. After a few minutes, it or another returned, this time staying for long enough for me to study it properly. Unfortunately the light wasn’t falling the right way to show the full purple colouring but no matter. Over the next twenty minutes it flew off and returned several times. It was just The Emperor and I. Otherwise, apart from the occasional aeroplane passing over the only sounds were those of the breeze and the birds. A magical moment for sure. 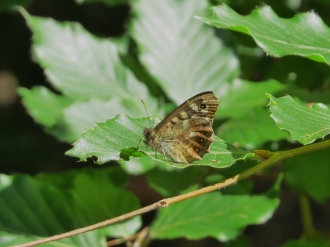 A Walk by the Thames

No birding this morning as I had an appointment at the dentist and then needed to get two new tyres for the car. An uncomfortable and expensive morning. This afternoon my daughter and I took the dog for a walk at Lechlade. We walked alongside the Thames.from Halfpenny Bridge to St Johns Lock, had a drink in the Trout Inn and then walked back the same way. There was plenty of activity with Swifts, Swallows and House Martins feeding over the river. There were twenty-seven Swans by the Riverside Pub along with numerous Ducks, mainly Mallard but also Muscovy, Aylesbury and many hybrids. House Sparrow, Goldfinch and Pied Wagtails were seen on the walk and at the Trout Inn there were more Swans and Ducks which provided good entertainment whilst we had a cooling drink. The Swans had three Cygnets and there were also Ducklings about. On the walk back a two Black-headed Gulls and a Common Tern flew downriver. Back in Lechlade we treated ourselves to a Marshfield Ice-cream each before heading home. Red Kite and two Buzzards were seen around Highworth.

A Walk from Axford

This is a walk that I would normally do in the winter or spring, however with things I needed to do in Marlborough it fitted in well. The walk starts in the centre of Axford, down across the Kennet and then a climb up to the southern edge of Hens Wood. Then it is along the ridge for a way before dropping back down to the meadows by the river and back to Axford. The Kennet was looking good, hard to believe that it suffered a devastating pollution incident last week (http://www.riverkennet.org/). Climbing up from the valley it was good seeing plenty of butterflies enjoying the sunshine, along here it was mainly Ringlets and Meadow Browns with Small Tortoiseshell and Speckled Wood seen further along the walk. Swifts and Swallows were feeding low over the fields and Whitethroat and Yellowhammer were seen along the Hedgerows. Entering the woodland, several Nuthatches were heard with just one seen. There was a lot of birdsound but it wasn’t easy to see them. I did manage to find Coal Tit and Goldcrest although Wren, Blackcap, Garden Warbler and Blue Tit all remained heard only. Some Deer were heard moving though the trees but these weren’t seen either. There were a good amount of moths flying around. Cinnabar, Red-necked Footman and Scarlet Tiger were the three I managed to identify. A De Havilland Tiger Moth was also good to see.  Neither the moths or the butterflies seemed to be willing to stay still long enough to get decent pictures. Along the river I managed a Wiltshire tick, Mandarin, there is a small breeding population here. Also seen were a pair of Black Swans, this is the third year I have seen them along this stretch. All connected to the collection of wildfowl at Ramsbury Manor I would assume. There were quite a few young birds on the water with family groups of Mallard, Moorhen and Coot seen. The only Odanata seen were a couple of Common Blue Damselflies. Three Buzzards were the only raptors in a grand total of thirty-nine species. Pretty good for the time of year. 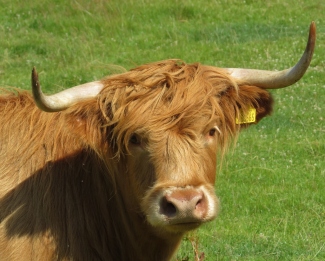 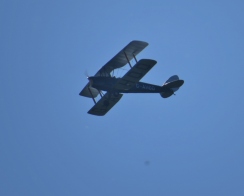 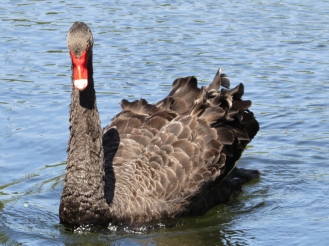 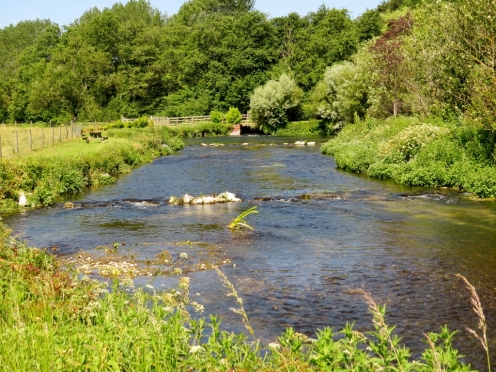 Is It Still Here?

Yes it’s just over there on the……..aah, erh, well, it was there when I last looked about five minutes ago. It must have just gone, and it was such a lovely bird! That was the result of my visit to Twitchers for the Spoonbill today. My third attempt to get one on my Wiltshire List. I hung around for a few minutes and checked out some other likely sites but to no avail. Apart from that it was just the evening dog walk for a birding fix. The usual Corn Buntings, Yellowhammers and Skylarks were all making the most of the lovely evening but despite nigh on perfect conditions not a sound of a Quail. Plenty of activity overhead with Swallow, House Martins and Swifts all sharing airspace with Microlights and Powered Paragliders.

Okay it doesn’t have the same ring to it I know. Anyway I finally managed to get myself to Greenham Common, not the best of weather, being a bit dull and quite windy but such is. And as the title suggests it was a case of Linnets on almost every bush and they were in a remarkable range of plumages from absolutely plain to bright red. In all I managed thirty species which was not a bad effort. Best bird would have been Woodlark but I was only ninety percent sure on the id.Unfortunately not a Dartford Warbler to be seen and only one Stonechat which was a very smart male. Five sightings were had of Green Woodpecker and two of Kestrel. There were no sightings of dragonflies and just two of butterfly, both Small Heaths. Also no pictures as I had forgotten to put the memory card back in the camera, Canons have no internal memory. On the way home I stopped in Savernake to finish my coffee. Two Buzzards were disturbed, it is amazing to watch such a large bird weave through the trees with such ease. Also seen were Coal and marsh Tit and Nuthatch was heard. The sun had come out and with it a fair number of Speckled Wood butterflies, at least a couple of dozen which is probably more than I have seen through the rest of the year.

Plenty going on this evening with a Yellow Wagtail over by the esso garage and as we walked past Bush Farm there was a mixed group of House Martins and Swallows mobbing a Sparrowhawk. Others seen were the usual singing Corn Buntings, a couple of small flocks of Linnets and another Yellow Wagtail which was carrying food. Final sighting was a Grey Heron flying low over the house, probably checking out my pond.

A bit of a runaround

A busy day today with quite a few shops that needed visiting, these included a garden centre and pet food supplier. So a route was planned that also included some birding. I started at Stratton for some shopping and then headed for Stanton Park, target bird here was Spotted Flycatcher, not the easiest species to find nowadays. I was in luck and had good views of at least three birds.

Plenty about with a couple each of Great Spotted Woodpecker and Goldcrest the best of the rest. The other thing of interest here was a large amount of froglets, in some places there were so many that it was hard not to tread on them. Next stop was the Garden Centre, then a look at some old planes and

then into Cricklade to get Sausage and Chips for my lunch. This was eaten whilst parked on the bridge over the Thames at Waterhay where I was surprised to see five Banded

Demoiselles, a first for me. Twitchers Gate was the next stop. Quite a bit going on here with a least a dozen Common Terns, some of which were carrying food. On the spit were a few Lapwings, 2 Common Sandpipers and eight Curlews. Plenty of small birds around with Reed and Garden Warbler, Reed Bunting and Bullfinch being the best. As I got back into my car a Wren flew in through the door, I took a couple of pictures before opening the window to let it out. At Kent End were four Little Egrets and a Green Woodpecker. Final call was the Countrywide store to get rabbit food. So all in all a busy day but pretty good. 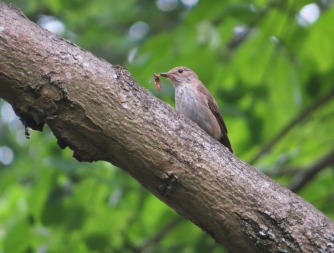 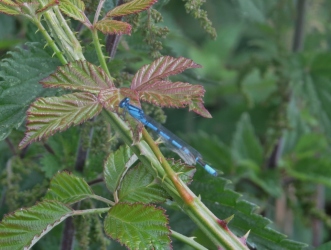 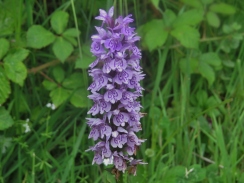