No birding as such today. Did a few bits in the house this morning and then my wife and I walked to Marlborough with the dog. A pleasant walk of just under nine miles along the railway path which starts by the farm shop. With no stopping to look for birds the list today was fairly sparse. A few Chiffchaffs, Goldfinch and Linnets along with a couple of Wrens and Great Spots. Near to Ogbourne St Andrew there were three Red Kites and four Buzzards circling. There were loads of butterflies all along the walk with Speckled Wood, Meadow Brown, Gatekeeper, Brimstones and Whites all noted. Early evening found me sat in the garden, enjoying the sunshine with a beer. A Sparrowhawk glided over, a dozen or so House Martins were feeding high up and small groups of gulls were heading towards Coate or the Water Park. A check on Twitter revealed that the Marsh Sandpiper had not been seen today but a Wryneck had appeared at New Passage. Also the juvenile Black Tern was still at the Water Park.

This morning saw myself, John and Pete heading off to Frampton for the Marsh Sandpiper that was found on Thursday. Not thinking that it would hang around for the weekend I was pleased to see on Twitter that it had been seen at first light. After a steady drive down we managed to park in the Splatt Bridge car park and headed north on the towpath. Joining a small group of birders we soon found the Marsh Sandpiper amongst the Greenshanks. A lifer for me and a UK tick for the others.  Although a good distance away great views were had and it was good to be able to directly compare it with Greenshanks. Also seen were several Ruff, Green Sandpiper, Black-tailed Godwit and Curlew on the river, Kingfisher and plenty of Yellow Wagtails. Pete found another wader on the back of the scrape which after some discussion we felt could have been a Wood Sandpiper. Unfortunately it was lost from sight and so remained unconfirmed.

hurch and Canal from Splatt Bridge 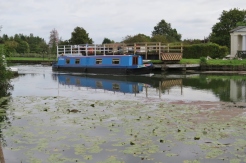 We headed back to the car and after waiting for a boat to pass the bridge headed off to Sharpness Docks. Plenty going on here with Redstart and Peregrine being the pick of the birds seen. 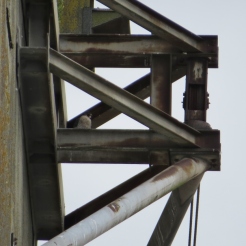 On the way to our next stop at New Passage a text was received reporting a Whiskered Tern at the Water Park. What to do? Well we decided to stick to our original plan and decision was vindicated when the Tern was re-identified as a juvenile black Tern. On arrival at New Passage where the tide was ebbing, lunch was taken whilst watching waders flying back out onto the newly exposed mudbanks. Dunlin, Ringed Plover and Redshank were the most numerous with Curlew, Turnstone and Oystercatcher also noted. We then headed out along Northwick Warth hoping for the Wood Sandpiper that had been seen here. It was not to be found when we arrived but plenty of good birds were seen including many Yellow and Pied Wagtails, Wheatear and Whinchat. After an hour or so with no sign of the Wood Sandpiper we decided to head off back to the car. Along with a couple of other Swindon Birders we wandered off. However within a couple of minutes we realised that the bird had been seen so hurriedly retraced out steps. We were rewarded with fantastic close up views of a very smart Wood Sand. 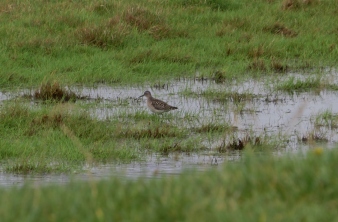 Back in the car I decided that it was a bit late to go to Farmoor for the Curlew Sandpipers so instead we set off for the Water Park hoping that the Black Tern was still around. A Grey Wagtail was the first bird seen but of the tern there was no sign. A couple of other birders said that it had been moving between 57 and 41 so we changed location. And 41 is where it was, an excellent year tick. With time passing quickly we made of to our final port of call, Pit 306, where to round off a good day of birding we were rewarded with seven species of Wader. More than twenty Lapwing, four Ruff and a Reeve, three Greenshank, two Ringed Plover along with single Dunlin, Green and Common Sandpiper. Also here was the Great White Egret, Little Egret, Heron and Little Grebe.

Total species count for the day was Sixty.

Yesterday there were eight species of wader seen at Pit 306 but unfortunately I was not able to visit. So this morning I headed out there for a look. Probably due to the improved weather overnight most of the waders had moved on with just Lapwing, Green Sandpiper and Dunlin seen. The Great White Egret was still around along with a couple of Little and the same of Heron. Juvenile Shelduck, Teal, Little Grebe, House and Sand Martins and Sedge Warbler also went in the book. A quick look in at 305 got no waders but still a good number of Canada and Greylag Geese here.

Not taking the Camera Always Works!

This morning I took the dog for a walk from Folly Farm up onto the Ridgeway and back via Liddington Castle. Having decided not to take the camera the first bird I saw was a posing Whitethroat at the copse. The cattle are out in the fields at the moment and I could see that there were some birds around them. Getting closer I saw that they were Yellow Wagtails. They were quite hard to count as they were moving in and out of the longer grass but I reckon that there were more than fifty in all. A few were lined up on a fence, another missed photo opportunity.  On the cropped grass slope towards the end of the fields were four Wheatear, two of which posed nicely atop thistles.and a Red kite passed overhead. Along the Ridgeway were more Whitethroats and some Meadow Pipits. Two small groups of Yellow Wags flew over as did a Heron and a number of Swallows and House Martins. At the castle were a couple more Mipits and a low flying US Air Force C17 was heading for Fairford. Back on the western slope were at least three more Wheatears and a couple of Chiffchaffs were in the bushes. In all a  reasonable total of twenty-three species were seen

Back to the Blog

After a week away in the Forest of Dean and a hard week at work I have managed to find some time to get back on the blog. The holiday was spent at a lovely large old house just outside of Lydney. This was a family get together for my sister’s thirtieth wedding anniversary. Not a birding holiday but I managed a bit of binocular time with a weeks total of fifty-three species. This included  a family of Buzzards, Green Woodpecker and Tawny Owl from the house, Siskins at Cannop Stoneworks, two Dippers at Parkend and Kingfishers during a canoe trip on the Wye. Other highlights were my first viewing of the Severn Bore and an excellent meal at the Ship in Newnnham http://www.theshipatnewnham.com/.

Sightings over the last few days have included six Grey Wagtails at Coate, a Barn Owl along the A4 near Hungerford, several Foxes and a live Badger. For today I had been considering a day out on the bike to see the Bee-eaters on the Isle of Wight. In the end I decided not to go and instead had a day touring around Wiltshire with Pete. First stop was to be Coate water but just as we were parking a text arrived informing us of a Black-necked Grebe at the Water Park. Bye-bye Coate and off to Twitchers where as well as the Grebe I managed my first Lesser Whitethroat of the year. After a short stop at Eysey where the best bird was a Barnacle Goose we headed for Chilton Foliat. Just the usual here and also at Froxfield which had just a single Little Egret and two Green Sandpipers. Then it was Wilton Water where along with the trains and narrowboats we saw several Little Grebe and plenty of House Martins. Then it was onto the Downs at Stanton St Bernard which as with the other sites was pretty quiet on the bird front. Linnets were the most numerous species, three Kestrels were seen along with Whitethroat and Tree Sparrow. Salisbury Plain was the final place visited where a Great Bustard was seen at the reintroduction site. Plenty more Linnets here along with Goldfinch, Meadow Pipit, Whitethroat, Whinchat and Wheatear. Butterflies seen included a Clouded Yellow and Brown Argus. Not including the Water Park we managed forty species which wasn’t bad for the time of year. Most importantly it was an enjoyable and relaxing day.

Posted in General Stuff, Out Birding

Went out for a ride on the motorbike this afternoon and called in at Chilton Foliat and Froxfield. Very quiet at Chilton with only a handful of birds seen. More going on at Froxfield with six Little Egrets, four Herons, five Green Sandpipers, fifty-three Canada Geese and at least three hundred Crows.

Twice in a Day!

The plan this evening was to go for the Cattle Egret(s) at Frampton on Severn. However during the afternoon, as often seems to be the way lately, my enthusiasm waned and I text Pete to say I didn’t fancy going after all. However after a bit of a guilt trip for letting him down (again) and a talking to from her indoors I changed my mind and decided to go. We left Swindon at just gone six and arrived at Frampton just under an hour later. As we approached the village it was great to see a cricket match on the green and dozens of mainly vintage motorbikes gathered outside the Bell Inn. A new location for me so I followed Pete on the walk to Court Lake. Having seen the Barnacle Geese on the grass we thought that we would be a bit early for the Egret as it has been coming into roost after half seven but it was already in position, giving great views on the middle island. Easy birding again. Also noted here were Common Tern, Jay, Sand and House Martins, Great Crested Grebe and many Mute Swans. With a bit of time to spare we headed of to the banks of the Severn at Old Passage. A  nice looking seafood restaurant is located here. Looking at the menu online I decided maybe a bit pricey for a post-birding meal http://www.theoldpassage.com/intro.html. We routed home via Stroud and made a quick stop at Bond’s Mill, a good site for Dipper. This, unusually was a new site for Pete but unfortunately no sign of Dipper but a family party of Grey Wagtails were good to see.

After shopping in Marlborough I took the long way home via Froxfield. As usual a worthwhile visit with four each of Heron and Little Egret, single Green Sandpiper and Kingfisher (which was a surprise as it isn’t obvious habitat here), a few Linnets feeding by the stream ans around fifty Canada Geese. On the lake were a dozen or so Moorhens. I headed home through Ramsbury and a quick stop at the bridge over the Kennet got a few Mallard and a few Trout.