With a lot more to be done at home today the only birding planned was an early morning visit to Savernake to look for Firecrest. One was seen on the WOS trip last week but as I left early I missed it. Pete had seen it yesterday in the same area so I was fairly hopeful that I would see it. After parking in my usual spot and walking through the Arboretum I arrived at Thornhill. I soon found the group of Fir trees and set myself up for a neck aching session of tree scanning. However within a couple of minutes Firecrest was heard and then seen. The first sighting was into the sun so I moved around to get the light behind me. From here I got a fabulous view as first one then two birds performed for me. Then from behind me another call and another bird. Way more than I had hoped for. I also saw just two Goldcrests, the first time I have had more Firecrests than Goldcrests. I then headed off to Braydon Hook hoping to get a better view of Lesser Spotted Woodpecker. Great Spot, Nuthatch, Treecreeper and Jay were all seen but no sight or sound of Lesser. By now my time was up so it was off home. Around lunchtime I received a Grapevine text reporting a Little Gull on Lake 83 at the Water Park. So my lunchbreak from the garden was taken up by a quick dash to Waterhay where looking from the road I fortunately found the Gull straight away. After watching it for a few minutes I headed off home via a quick stop at Twitchers. A brief scan of the scrape area didn’t find me anything and my first of the year Sedge Warbler remained heard but not seen. Then it was off home and back into the garden with another good year tick in the book.

Just a One Tick Day

After yesterday”s great day today was back to the normal a bit of birding amongst the chores type stuff. This morning a look in at the floodwater and at the north slope of Liddington drew blanks. This afternoon we headed out to Dobbies garden centre at Cirencester via Wroughton. Sparrowhawk and Red Kite at Wroughton and a Green Woodpecker calling at Dobbies. The plan was to stop at Eysey on the way home to walk the dog and to look for LRP’s. The weather put paid to that plan with a fairly impressive hailstorm followed by heavy rain although I did manage to find a couple of House Martins amongst the Sands (that was the tick). So after unloading the plants at home and doing a couple of other little jobs we decided to try again with the dog. I suggested that we went to Knighton were there is a nice walk along to Littlecote House. For some reason I missed the turning and we ended up in Chilton Foliat. A worthwhile error as it happened as on the way back to Knighton a Barn Owl flew across the road ahead of us. On the walk we had Cetti’s, Willow Warbler, Chiffchaff, Nuthatch, Grey Partridge and another or possibly the same Barn Owl. Also seen were a couple of Hares.

We were on the edge of another heavy rainstorm on the way home and had the strange combination of torrential rain whilst driving towards the setting sun which was low and dazzling. This gave a fairly impressive rainbow.

Early doors birding in Savernake then garden and house stuff is the plan for tomorrow.

Portland Bill and the Somerset Levels

Five o’clock this morning saw myself and Ian leaving Brinkworth heading south for Portland. After a brief stop at Ferrybridge which picked up Sandwich Tern we arrived at a bright but breezy Portland. A brief stop at the Obs was made where a Blackcap was seen. Two year ticks already. We then headed down to the Bill and sheltering from the wind by the Lobster Pot Cafe we commenced seawatching. Most numerous were Gullemots and Razorbills along with good numbers of Gannets and Fulmars. Around a dozen Manx Shearwaters were also seen as were a few Rock Pipits. 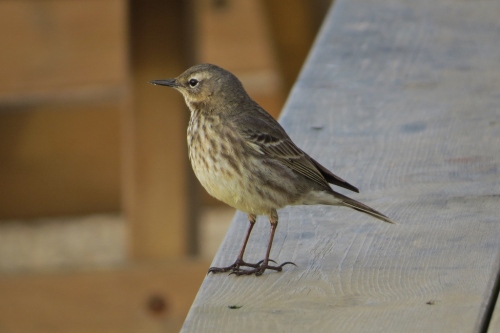 Moving on from here we saw a smart male Redstart come in off the sea. Unfortunately this was the only migrant that we saw. From here we headed for Radipole. Plenty of action here with Marsh Harrier, Peregrine, Bearded Tit and many Cetti’s Warblers being the highlights. Next stop was Portesham to try for the long staying Pallas’s Warbler. After a bit of a wait Ian caught sight of it and a couple of brief views were had, certainly enough to confirm the i.d. Then it was off on a pleasant cross country drive to the Somerset Levels where our main target bird was a White Stork that had been around for most of the week. Unfortunately information from pager and twitter suggested that it had headed off north and had been seen over Gloucestershire.However there were still some good birds to be had there so we carried on. Between Meare Heath, Ham Wall and Tealham Moor we managed to bag, Garganey, Great White Egret, Glossy Ibis, Ring-necked Duck, White Wagtail and Cattle Egret. 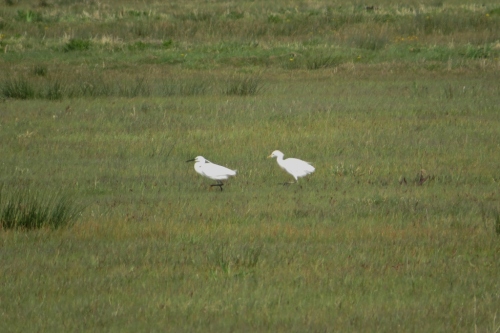 We also heard four booming Bitterns. From here it was a drive back on the motorways to Brinkworth. We ended the day on a creditable eighty species from which I managed ten year-ticks.

After a great Sunday I woke up on Monday morning with a sore throat and high temperature. Unfortunately this meant a stay in hospital for as it turned out three days. I had a nice room but unfortunately a lousy view. The only bird I saw in the whole time was a Red Kite. Arriving back home this afternoon there were two Red Kites lazily circling low over our back gardens. Very nice. I needed a bit of fresh air so we took the dog for a short walk at Coate. This was just from the car park to the causeway and back. Around the diving board duck numbers were well down but there were twenty-six Swans and a Greylag Goose. A Nuthatch was calling from the trees around the car park. With a fairly strong cold wind I wasn’t expecting much action and I was right. Highlights were a single singing Willow Warbler and four singing Chiffchaffs. A quick look i at the flood water in Chiseldon found a pair of Gadwall, a site tick for me.

From the Forest to the Downs

Today’s birding started at eight o’clock  with the WOS walk in Savernake. There was plenty of birdsong to listen to and a good number of birds to be seen. Nuthatch and Great Spotted Woodpecker were soon picked up and the first of many Chiffchaffs was heard. Five species of Tit were seen, unfortunately Willow wasn’t one of them. Near to Braydon Hook a Lesser Spotted Woodpecker was heard drumming and was eventually seen by some of the group. I managed a fleeting glimpse as it flew off from the tree. At Thornhill, Siskin was added to the list and at the pond we saw good numbers of Toads. I had to cut the walk short here as there were things to be done at home. Later on in the afternoon my wife and I took the dog on a Ring Ouzel hunt on Liddington Hill. An hour or so of walking got around a dozen species including the usual Corn buntings and Yellowhammers. Single Wheatear and Stonechat were good to see but no sign of the Ouzels. Returning to the car we saw Robin Nelson watching the north facing slope of the hill. Joining him he informed me that there were five Ring Ouzels to be seen. We then spent the next twenty minutes or so watching four male and one female Ouzels feeding. As a bonus a Swallow, my first of the year was also seen. So what I always feel is the best sighting of spring, the first Ouzels on the Hill is now in the bag. An excellent day.

With lots to do at home today I missed out a bit on birding on such a nice day. Two quick look-ins at the Chiseldon Floodwater got me four Mallard and the Ruddy Shelduck. I went out to Eysey but only stayed for twenty minutes or so. Three Green Sandpipers and a few Sand Martins were the first birds seen. Willow Warblers and Chiffchaffs were singing, a Grey Wagtail flew over and Sparrowhawk and Buzzard were both seen soaring overhead. Finally I managed a half hour on Liddington Hill where it was very quiet. Other than the usual corvids, gulls and pigeons just four species seen. Yellowhammer, Linnet, Chaffinch and Blackbird. Dissapointing considering the amount of Wheatear and Ouzels seen elsewhere today.