As is the way at this time of year there are always a few year or county ticks on offer. I started off with a morning walk from Folly Farm towards the Ridgeway. Corn Buntings, Yellowhammers and Skylarks were all singing well and a flock of around twenty-five Linnets was feeding on a newly ploughed field.At the first copse were more of the same birds. Reaching the first gate and heading for the old rifle butts it all changed with hardly any birds to be seen or heard. One of the Kestrels was perched on top of a Hawthorn and half-a-dozen Mipits were lining the fence at the top of the slope. Heading back towards the gate a tuck tuck call alerted me to the presence of a Ring Ouzel. A fine looking male was flying in from the south and I watched as it flew by and then landed on the top of a nearby tree. Nice to have a good clear view after the skulkers of yesterday. Back at the copse a male Wheatear flew up and away across the fields clearly showing its white rump. After lunch I headed off to the Water Park. At Eysey there were three Little Ringed and a Ringed Plover. Also two each of Dunlin, Lapwing, Shelduck and Little Egret. 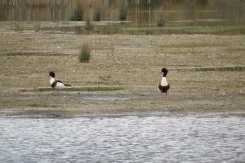 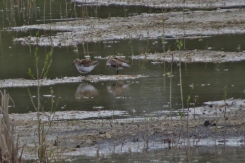 The big lake had a single Oystercatcher and a handful of Shoveler. Moving onto Twitchers there were six Black-tailed Godwits flying around. Three Oystercatchers flew up from the scrape and a single House Martin passed overhead. The final walk of the day was to take the dog around Coate Water. Highlight here was a flock of nine House Martins. Nuthatch, Marsh Tit, Blackap and several Chiffchaffs were also seen.